As stated in the Poverty Reduction Act, the Market Basket Measure (MBM) is now Canada’s Official Poverty Line. The Northern Market Basket Measure (MBM-N) is an adaptation of the MBM that reflects life and conditions in two of the territories – Yukon and Northwest TerritoriesNote. As with the MBM, the MBM-N is comprised of five major components: food, clothing, transportation, shelter and other necessities. The MBM-N is intended to capture the spirit of the existing MBM (i.e., represent a modest, basic standard of living) while accounting for adjustments to the contents of the MBM to reflect life in the North. 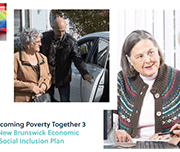 The new Economic and Social Inclusion plan for New Brunswick builds upon progress accomplished over the past 10 years. It includes nine priority actions divided into three pillars:

The objective of the plan is to reduce income poverty by at least 50 per cent by 2030, in line with the objectives of Opportunity for All, Canada’s first poverty reduction strategy, and those of the 2030 Agenda for Sustainability of the United Nations. 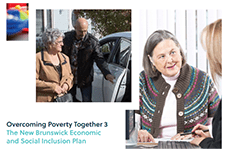