Since taking office in the fall of 2015, the Liberal government has made important changes to the publicly administered components of Canada’s retirement income system (RIS). It has restored the age of eligibility for benefits under Old Age Security (OAS) and the Guaranteed Income Supplement (GIS) to 65, it has increased the top-up on GIS benefits for single elderly persons, and it has agreed with the provinces to enhance Canada Pension Plan (CPP) benefits, starting in 2019.
Each of these changes, on its own, contributes to one of the two main objectives of the RIS: to minimize the people’s risk of poverty in old age and to enhance their ability to retain their standard of living as they move from employment to retirement. However, as Bob Baldwin and Richard Shillington show in this study, when examined together, the changes are problematic and incomplete. 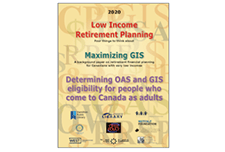 Results from the 2016 Census: Examining the effect of public pension benefits on the low income of senior immigrants
View >

Are Low-Income Savers Still in the Lurch? TFSAs at 10 Years
View >